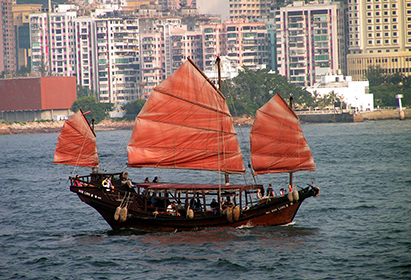 Lung Kwu Tan (龍鼓灘) is an area on the far North Western corner of New Territories; a peninsular with unimpeded views looking out over the South China Sea. Although it's currently not the most convenient of places to get to, it is one of the few great places to catch a spectacular sunset in Hong Kong. Lung Kwu Tan has some residential villages nearby, although it is predominantly an industrial site featuring the likes of incinerators, landfills as well as steel and cement factories. The beach is one of Hong Kong's only natural black sand beach and a popular place for kitesurfing. Rare, endangered Chinese white dolphins can sometimes be observed from shores as well as big turtles. Lung Kwu Tan has been included in proposed long-term land supply and land reclamation projects, with discussions starting in April 2018. Of the 5 proposed land reclamation sites, Lung Kwu Tan is the largest and is expected to provide 220 to 250 hectares of developable land. Additionally, the newly constructed Tuen Mun-Chek Lap Kok Link (TM-CLKL) underwater highway, once completed, will provide the most direct route between the Northwest New Territories and North Lantau Island, as well as an alternative route to the Airport and a connection through to the Zhuhai – Macao Bridge (HZMB).